How I met Emmanuel: a winter running story 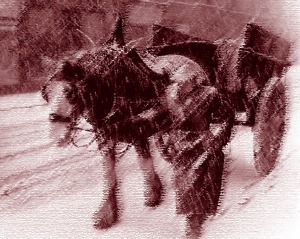 WINTER RETURNED this morning, and it’s nearly Christmas. Snow is everywhere, big fluffy flakes floating down from the heavens. I suit up for my morning run, but one look at the road conditions sends me back into the house to change into my “Icebug” trail running shoes, the ones with metal studs embedded in the soles. I head south on the gravel side road near my rural home. It’s cold and windy as I disappear into the rolling, resting countryside. This is the best.

Just when I think I’ve got the place all to myself, I approach a steep downhill into a small hollow with a stream at the bottom. Lo and behold there’s a black horse and cart descending from the opposite side, led by a ragged-looking older man with a grey beard.

I’ve seen this Mennonite (I presume) fellow before, walking beside his load, like a gypsy. I’m puzzled. This isn’t really Mennonite country, which is 20 kilometers away near St. Jacobs, Ontario.

Now he’s running in front of his horse. Why? It becomes obvious as he crosses the stream and starts climbing towards me. His cart is seriously overloaded and he’s making a desperate charge at the uphill, although he’s got several hundred meters of climbing ahead of him. Momentum alone won’t do it.

I stop to watch as he climbs towards me. He’s in heavy boots, no gloves on his thick hands, a wool coat and hat, and he’s tugging on a rope that’s attached to the horse’s bridle. He gets about halfway up the hill, almost reaching me, before gravity abruptly stops the whole load.

He looks up, very surprised to see another human out here, five kilometers from anywhere. “Can you give a poosh?” he asks very softly, with an accent I can’t place – maybe German.

“Sure,” I reply enthusiastically.

The road is covered in several inches of fresh flakes, with hard-packed snow underneath. I’d normally be helpless in this predicament, but I’ve got Icebugs! I’m Superman today.

I throw my body to the task at the back of the load, but the cart doesn’t budge. In fact, it starts to roll backwards. Yikes! I jump out of the way.

Menno is urging his horse on with clucks, whistles and hefty tugs on the rope. It digs in with its heavy hooves and stops the cart from rolling further backwards, creating a temporary equilibrium.

I have a good look at the load as I get back behind the cart. Lots of scrap firewood, grocery bags of indeterminate stuff, empty pop bottles, etc. It’s piled high, partially covered by a canvas tarp. Underneath the cart he’s lashed a large tree limb that’s nearly scraping the ground. We’re talking hundreds of pounds of stuff, I think. I can see why his poor horse is struggling. He’s like a rural bagman, although I’m still puzzled about where he’s coming from, or where he’s going.

After a minute or two, Menno’s persuasion works and we’re off. I pound my legs and push for all I’m worth. We struggle for about 25 meters, and then come to a sudden stop again. I’m panting, and so is the horse. It must be a strange sight: a skinny guy in black tights, windbreaker and running shoes, trying to push a Mennonite cart up a steep hill in a snow squall.

“He just needs a little rest,” I yell to Menno. No reply. I catch my breath.

We’re not far from the crest of the hill, maybe another 30 meters, but suddenly I hear a rumbling noise and realize that we’re awfully vulnerable, completely blind to anyone driving over that hill. Is it a snowplough? Or maybe the school bus that often passes me on this back road around 8 a.m.?

I pray that nothing appears ahead, but get ready to dive for the ditch if it does. Even if Menno and I can escape, his horse is trapped right in the middle of the road, anchored to the deadweight cart. I shudder.

Menno is yelling at his horse now, and finally it moves with a sudden jerk.

As the cart rolls forward I pull out all the stops (although I’m not sure it makes any difference), digging my Icebugs into the frozen gravel beneath the snow. The horse perseveres and we start picking up speed. I glance around the side of the cart and see that we’re cresting the hill. I push for another few steps, then stop, gasping. The cart pulls slowly away.

I jog to catch up, then accelerate by. Menno nods and whispers a quiet “thank-you” as I pass.

I want to know all about this mystery man – where he lives, why he’s out gathering wood in the early morning – but his averted gaze prevents me from prying.

Freed from the burden of pushing the cart, I run effortlessly northwards into the wind. In 25 minutes I’m home, downing a bowl of hot oatmeal to feed my animal hunger, and wondering about the fate of Emmanuel and his weary horse.