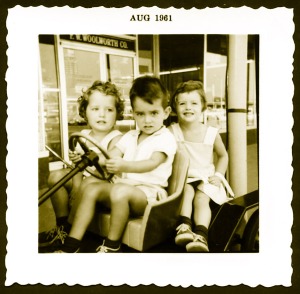 ITS CROWDED DOWN HERE in the birth canal! I reach the start line first, before my sister Beth, but then things get screwed up. I’m sure it’s not my fault I’ve turned breach. But it jams things up for both of us when I get stuck the wrong way around. My mother is exhausted from two days of labour. Her small town Alberta doctor panics. The result? A Caesarian. And so I’m suddenly at the end of the line instead of the head. My sister is lifted out first, leaving me in second place. A rivalry is born.

When I tell people about my twin sister, they invariably ask, “Oh, do you have a special connection to her then?” (Occasionally, they ask “identical or fraternal?” which is more troubling.) Well, I suppose I do. Here are the things I believe we have in common, both profound and trivial:

Is this because we were born on the same day, or raised in the same era, or went through until high school in the same class? I’m not sure. We’re just alike, if not identical. We weren’t always close, especially after about Grade 6, when our circle of friends diverged. Beth hung out with a tougher, more “in” crowd. She was the first to have a steady boy friend. And I think we took pains to avoid each other by high school, almost to the point of pretending we weren’t related.

Beth thinks that she was the “bad” one, and I was the “goody-goody.” Sure, Beth took my mum’s VW Beetle out for a spin around the neighbourhood when she was 14. I couldn’t claim that, having only meekly driven it up and down the driveway when our parents were away. But really ­– does that compare to being a 6-year-old truant? Playing hooky for an entire afternoon when I was only in Grade 1, in order to avoid my first detention?

When I think back on it now, the teenage dividing line between the two of us ­– the one that really separated us for a period of time – was obviously puberty. As young kids, we liked to wrestle. We’d fight pretty hard, and I was usually the loser because Beth was stronger. (Even the earliest family movies show her pushing me around, and me retaliating with a bit of hair-pulling.) My older sister was smaller, and my younger sister was, well, younger, and off-limits when it came to fighting (but not teasing).

Somehow, Beth and I were seen as equally matched, and rough-housing was tolerated, almost encouraged. We once fought in a hotel room, and when I missed with the swing of a pillow, taking out a lamp instead of Beth’s head, I got my father’s stern discipline. Not physical, more psychological. He arranged with the hotel management to take me down and sign some sort of apology for the damage. Beth had a good laugh over that one: score one more for the first born.

In our early teens, Beth and I used to go skating on Friday nights with friends, and then return home for a little rumble in the appropriately named “wreck room,” down in the basement of our suburban back-split. The whole family would sit on the sofa and watch as Beth and I squared off on the floor – sort of like “All-Star Wrestling” (the WWF of my childhood), only we weren’t faking it. In the absence of a brother, my tomboy twin sister Beth had to do I suppose.

I distinctly remember the week when I finally emerged victorious from a Friday night matchup, pinning Beth on her back for the count. Testosterone was kicking in; I don’t think we ever wrestled again, at least not as family entertainment. And soon after, my parents explicitly forbade me to punch or push around any of my sisters, Beth included.

We could still compete on the tennis court, however, and we were evenly matched there. Beth was mentally stronger, less likely to lose her cool in a competitive match, but I was quicker and more mobile. Beth was really the stronger player for her cohort, however, because as a mid-teenager, I couldn’t measure myself against girls. So when we both attended a tennis camp one summer, Beth was in real contention with the other females, while I was definitely low on the guy echelon. At the end of a week of drills and tournaments, the trophies were handed out. I can’t remember if Beth won anything. But when I was awarded a small “merit” plaque near the end of the ceremony (for good behaviour or something), Beth whispered supportively to me as I rose to collect my honour: “That’s the suck award.”

In the tennis department, my younger sister Ruth, the baby of the family, eventually eclipsed us both. I like to think that she benefited from years of competition with us, but this isn’t really true. She simply started younger and focused on one sport. Beth and I were all over the place: she doing crafts, sewing, and hiking, and me playing soccer and field hockey and running track. Ruth was tennis, tennis, tennis – eventually winning her a college scholarship in the US. There’s something to be said for not being a jock of all sports.

Somewhere towards the end of Grade 12 we got back on roughly parallel tracks. We had shared interests in back country hiking and tennis. We had some common friends, and even attended the same church youth group, which would have been unthinkable a few years before. Beth did cool stuff like … go into a barn on the Delta farmlands, find a regurgitated owl pellet, and reconstruct a mouse skeleton from the bones she found inside (there’s the “small objects” gene). I couldn’t have managed that myself, but I greatly admired her for it. Despite being the boy, I was more squeamish, whereas Beth was always picking up crabs, fish, slugs and anything creepy-crawly.

My twin sister and I took a similar path when we turned 18: we fled the confines of our parent’s influence and moved to remote corners of the country. Beth drove north to the Yukon; I biked east to Nova Scotia, then later, Ontario. Our identical paths of independence separated us for a long time – to a certain extent, still to this day, as we see each other only every year or two.

Beth had two children while still in her early 20s. My parents found this hard because they imagined her in some sort of professional job, not living on the margins in a small, mostly native village, nearly 100 miles outside Whitehorse. Although I went to university in this period, I admired Beth’s self-sufficiency, and for sticking to the life that she’d chosen, despite my parent’s opposition. I also became fascinated with Beth’s kids, Franklin (appropriately named for a northerner) and Cassandra. I visited when they were young, still living in a log house she built with her husband Dennis – no electricity and with water fetched from a nearby creek. The depth of my feelings for these little beings surprised me, but were only a precursor to the emotions I’d experience upon having my own kids a decade later.

The marriage with Dennis foundered quite early on, and it was a period of crisis for Beth. I got a phone call one evening to say that he was an abusive husband and father, had threatened his family, tried to prevent them from leaving the house, and that a gun was involved. Beth survived that awful night, but I flew north to spend a week helping her cement the separation and reassuring her that it was the right thing to do. We spent one night sleeping on the floor of a friend’s house, unsure of where Dennis was, and both a little fearful. I’m sure it was a low point for her. She couldn’t know then that she would get retraining for a better-paying job, that she would eventually move to Whitehorse so the kids could go to high school, and that everything would work out fine.

Beth’s alienation from our parents lessened as she got older, and so did mine. As we saw them grow more dependent, then sick and vulnerable, we realized that maybe we had more in common with them than we ever realized as youngsters. Beth was just a two-hour plane ride away, so she visited often, and totally rebuilt her relationship with our mother. This also meant that Mum became a frequent visitor to the Yukon as well, especially after Franklin started having kids and she discovered the late life joy of great-grand-parenthood.

My mother’s final two months of life in palliative care meant a tag-team of alternating week-long visits for the three of us who lived far away, and nightly ones for my elder sister Ann who could drive to the hospital after work. I thought I’d said my final goodbye at Easter, but Beth called about two weeks later to say that Mum was hanging on by a thread. I made one more visit, and indeed Mum was very quiet, with only minimal response to touch and voice. Beth and I played scrabble and chatted through the long afternoons, then took turns sleeping in her room at night. We were both in awe at mum’s resilience and spiritual strength, but unsure of how to help her on the last leg of her journey.

She died one quiet evening, with Beth sitting right beside her. Ann and I had gone to supper, but returned to the hospital with a family friend. Beth’s breathless exclamation startled us at the door of the darkened hospital room. “She’s gone!” Beth gasped, as if she couldn’t believe the thing we’d been expecting for so long had finally occurred. We didn’t rush away, instead spending another hour or two with her, straightening her out, brushing her hair. When we finally left the familiar hospital for the last time, Beth turned to me and said almost victoriously, “We did it!” Although the “win” was really Mum’s, Beth didn’t have to explain: I knew exactly what she meant.

So, do we have a special, twin connection? We like to joke about it now, especially when something uncanny happens. While cleaning out Mum’s condo we were showering in separate bathrooms when the phone rang. We both came flying out semi-dressed to answer the call, simultaneously grabbing the two phone extensions before bursting into laughter. “It’s the twin connection!” Beth screamed in that giddy, child-like voice she uses when something really amuses her.

Although genetically, we’re no closer than I am to my other two sisters, maybe there is something to the fraternal, in utero bond, a shared take on the world resulting from being in such close company for the first nine months of our lives.