If I had a hammer (how I came to appreciate curling) 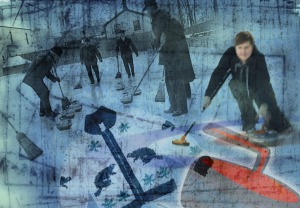 CURLING IS ONE of those games you don’t take seriously at first. Everything about it seems bizarre ­– the non-athletic look of its participants, the peculiar equipment, the glacial pace, and of course the hyper-urgent shouted instructions between thrower and sweepers while the rock is in motion (“Hurry hard!”).

My father curled when I was a kid. He was a United Church minister, and Mondays were his weekend, the day when he worked in our garden at home, or in the winter … went curling in the Vancouver minister’s league.

He had four pieces of equipment. The rubbers he wore over his street shoes, his curling broom (back in those days, it really was a corn broom, albeit specialized, not a pointless-looking swiffer-brush like they use today), his plaid beret, and his black, white and green Cowichan curling sweater with beavers in the pattern (I think Roots spotted his sweater when they were looking for their first logo).

We didn’t think of my Dad as sporty (that was Mum’s department), so curling seemed to fit. I think we only once saw him play, and the whole environment was very strange to us – like a genteel hockey rink for older men. Their brooms made a wierd sound as they swept the stones on their way  – a rhythmic thwacking that no longer exists.

Dad reported on the outcome of his game every Monday night at the dinner table – we could tell it was a confounding discipline, maybe a little like golf – and over the years he gradually climbed the ranks of the preacher’s league. Eventually he became skip of his rink, something we were all proud of. At least he was now at the top of the heap, even if it wasn’t something we could brag to our friends about.

I think Dad tried to instill a love of the game by watching it on TV with me when I was small, patiently explaining its arcane rules and strategy. But like his attempts to interest me in his other passions – antique cars, contract bridge, genealogy – it was all deaf ears I’m sorry to say.

But things change, right? For me it started with the 1998 Olympics in Japan, where curling was introduced as a medal sport. I’d get up at 4 am to watch live events, and curling was a big feature (along with the other new sport, snowboarding). The Canadian women played fantastically, winning gold, and the men got silver. It seemed to be a game that demanded poise, nerve and execution under pressure. Okay, it wasn’t really athletic, but the technical skill and mental toughness were easy to appreciate.

I’ve always loved a game that features swings of momentum, and curling had that in spades. The Canadian women were trailing the Brits in the late stages of the semi-final. But with one amazing crack, Joan McCusker’s rock eliminated three British stones, vaulting her team into the lead for the first time in the game.

After that, Dad came for a visit, and was surprised to have me asking him questions about drawing, peeling, tapping, freezing, stealing and the four-rock free guard zone. We watched a few games of the Brier together, and his old passion for the game resurfaced. I never knew where he learned it, but quite possibly in Saskatchewan, where he was a student minister in the 1950s.

Several weeks ago, I got a Facebook invitation to a friend’s birthday party. “Hurry hard!” it promised – an evening of novice curling at our local club, with the promise of a lesson and some general hilarity. Of course I accepted immediately.

We were 15, almost four teams on two sheets of gleaming, beautifully pebbled white ice. Our friendly teacher Kathy immediately chastised those of us who had worn street shoes to the club. The ice is sacrosanct, she explained. The tiniest stone wedged in your sole can scratch things up and cause the stone to run unpredictably. Next time, carry your cleanest shoes in she admonished.

Not surprisingly, curling is a whole lot harder than it looks on TV. Getting the approximate direction isn’t so bad. In fact, there was nothing separating our narrow strip from the one beside us, and we never had a stone stray into their game. The tough part, however, is the weight – launching the stone hard enough to make it into the house (the 12-foot series of red, white and blue rings) without overshooting completely. You get to throw two stones per end, and it was pretty common to have one come up short and the next one sail long – both of them out of play.

A curling stone has a mind of its own. You send it down the ice, it seems to be traveling at a steady velocity for 15 seconds or more, then suddenly that 40+ pounds of granite just runs out of steam. In 10–20 feet it decelerates rapidly, curling at the same time as it grips the ice and swings left or right, depending on which direction you’ve twisted it upon release.

In any case, Kathy threw everything at us in about 30 minutes – the delivery, the sweeping, the scoring, the strategy – then disappeared to join her mates in the truly hallowed part of the club, where the draft beer is served, leaving us to execute her instructions.

As it turned out, curling is one of those target games – like darts, billiards, bowling and shuffleboard  – that have a theoretically gentle learning curve. Think about it. Your first roll of the bowling ball can quite possibly be a strike. Or the first dart you throw a bull’s eye. It’s not likely, but it could happen. Contrast this with say, tennis (where your first serve is a near impossibility) or hockey (do you remember your first attempt at a slap shot?) or even soccer (you want to try heading that corner kick into the net?). So even on the very first end, we were putting some rocks into the rings (okay, a handful out of each end’s 16 throws).

The laughable part of the game is the sweeping. Not because you look or feel goofy doing it (which you do). It’s the improbability of it: that somehow your furious rubbing of the ice as you hoof your way down the ice is having any impact at all on the rock’s speed or trajectory. I think I should definitely ask the Mythbusters TV guys to conduct a scientific test, because I suspect that sweeping is one of those things the faithful believe in, but which has no basis at all in fact.

Mark Shegelski, a physicist at the University of Northern British Columbia, has written half a dozen papers on the science of the game, and he admits it is more complicated than anyone thinks. Here’s what he says about sweeping: “Now in sweeping in front of the ice here, you are bringing the temperature of the ice up and that reduces the friction, but you’re also creating a thin film of a quasi-liquid type [of] material. This is something that is not fully agreed upon by everybody, but you know, the work that we’ve done strongly supports the idea that the key thing going on is the friction that is due to the thin liquid film.”

So, we’re sweeping our guts out, but the effect is “not fully agreed upon” even by physicists? Hmmm.

In any case, our game swings wildly through five ends. Never mind hits or takeouts. We’re happy if we can get any of our rocks to stop inside the rings. The second last end is the worst. No rocks in scoring position for either team. But in the last end, our training comes together. We put our first four rocks into the house, and the other team is still struggling. We may overtake them for the win!

My back is turned for second, I hear another one of those satisfying crunches when rock hits rock (the sound on TV doesn’t come close) and the other team has somehow banished two of ours from the house, and is now sitting shot stone (curling terminology for the rock closest to the “button”, the middle of the rings).

It all comes down to the last stone, the hammer. Candace, our skip and the birthday girl, holds this privilege, but it’s a tall order. She needs to draw to the button – a rather routine shot for an expert, not relying on any fancy angles or hits, just a simple bull’s eye from about 100 feet away. No sweat, eh?

Candace launches her final stone, the weight is good, but the direction is off. Our sweepers do their valiant thing, but it fails to reduce the curl and the rock veers left, well wide of the rings. We’re the losers.

We retire to the heated lounge behind the ice as the club dims the sanctuary lights. It has the feel of a Legion, but the beer is way better – fancy micro-brewery drafts, and even effete beers like Corona in bottles. Candace says the best part of the evening was when instructor Kathy asked her suddenly, “Who ARE you people? Academics?”

“No,” she replied, just a bunch of musicians and artists mostly, although Candace likes that, “we came off as intelligent as we slipped around like howling crazies.”

Like Loading...
Tags: brush, curling, hurry hard, rock
From: Sports
← We lost Sarah
Maple syrup moves to the rhythm of spring →
No comments yet