The little wave that lives forever 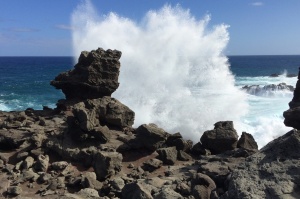 Once upon a time there was a little wave, bobbing along in the ocean, having a good old time. She was enjoying the wind and the fresh air. She had her friends around her.

Together they laughed and joked, relishing their freedom, far from their parents’ supervision. They were carefree and happy, no worries to distract their play.

But then she notices the bigger waves ahead of her, crashing against a rocky shore far, far away in the distance.

“My goodness, this is terrible!” the little wave says to her buddies. “Look what’s going to happen to us! Can you believe it?”

Then along comes an older, larger wave. It sees the little wave looking grim and asks her, “Why are you so sad?”

The little wave replies, “You don’t understand! We’re all going to crash! All of us waves will eventually be nothing. Isn’t it awful?”

The large wave regards her gently, and the two of them roll along quietly for a few minutes. “There’s something you need to understand,” it says finally.

“You’re more than just a wave. You’re part of a big wide ocean that’s always changing. Even though we all crash upon the shore eventually, there are always younger waves behind us. And there are new waves yet to come behind them, not yet formed by the wind.”

The little wave thought about that for a minute, then she says to the big wave: “But the shore still scares me. I don’t want to think about getting there.”

The big wave answers her: “The important thing is to be the best little wave you can be, and to enjoy yourself, every day. Don’t fear the shore. And when you get there eventually, embrace it. It’s how you get to live on, as part of a new wave some day. It’s always been that way and always will be.”

The little wave pauses for a moment, smiles at the big wave, and then goes back to playing with her friends. She continues to grow in size and strength, confident that her journey is still young and exciting. And she knows that in some mysterious way, her wave will last forever.

This story originated as a short parable in Tuesdays with Morrie, the bestselling biography by Mitch Albom. I re-wrote and adapted the story to be read at the memorial service of my friend Randy Heasman by his 12-year-old daughter, Rahel. The photo above is from Maui, where the waves of the Pacific Ocean, driven by the trade winds, smash into the volcanic shoreline of Hawaii.