A track workout is a repetitive thing 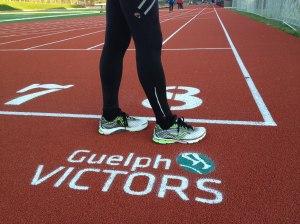 That’s runners’ shorthand for the details of our 45-minute training session at the U of G track. We run around in circles, punctuated by rests, in the hope it will translate into better fitness and faster running in upcoming races.

Our Guelph Victors coach John Marsden sends a similar email each week, to a list of about 200 runners. Between 50 and 100 people show up, in two sessions, and run “repeats”, as they’re called.

I live two kilometres away from the stadium, so I jog up there as a warmup. When I arrive there are 25 people clustered on the new, brick-red track for the 6 pm session. (There’s also varsity football practice underway on the infield, 30–40 large males, doing blocking, catching and running drills.)

John explains tonight’s workout: “It’s straightforward: 6 times 800 metres [twice around the track, or about 1/2 a mile], with nearly full recoveries of 3 minutes in between each one. Then, following that, the same accelerating series we did last week, 400 metres, 300, 200, 100 with decreasing rests in between.”

All told, that’s nearly 6 kilometres of very hard running, at faster than 5K race pace. The only thing that makes this possible is the rests in between each interval. It’s a little like the new High Intensity Training workouts you may have read about. We run for a short period (around 3 minutes) to exhaustion, we rest for the same duration, then do it again. And again. And again …

During the run portion my heart rate will soar, almost to its maximum. During the rest, it will slow, not to complete resting rate, but from a high of say 175, down to about 100. We’re accustomed to this see-saw, so although we can’t even talk after each repeat, we’re willing to do it all over again after the short recovery.

My own pace for 800 metres tonight is about 2:58; others are faster or slower, but not by much. We all start together and finish within about 30 seconds. If I were to run the distance absolutely flat out (as in a race, with no expectation of another repeat) I could only go a little faster, maybe 2:45.

We all cluster at the start/finish line, and John says “go” as he clicks his stopwatch. We’re immediately into the first corner, and already forming into distinct “packs” of similar-paced runners, clustered on the two inside lanes of the 8-lane track. I’m with about 6 others – three guys and three women. We run very close to each other, like a bicycle peloton, in silence except for the squelch of our shoes on the damp track surface. Sometimes our arms brush but we never stumble or trip. It’s a runner’s communion.

For most of the first lap it feels easy, even though we’re moving quickly, not a sprint, but a lot faster than a jog – long strides with big arm swings. We all know how to guage our effort so that we run an even pace over 800 metres, although the work gets progressively harder as we go. As we finish the first lap, John yells out our split times: “85, 86, 87 …” (i.e. seconds). We’re breathing heavily now and must concentrate hard to retain speed and form, even as our legs start to tire and protest in the second lap.

I stare intently at the legs of the runner just ahead of me. Deb is a psychology professor at the university, but running is her passion. She’s an accomplished Ironman athlete (she’s competed at the world championships, in Kona, Hawaii), and a road race veteran. Last year at this time she’d just delivered her first baby, a girl. But she’s been back on the track all this summer and is now as fit (or more so) as before she gave birth. I follow closely and use her pace to keep from slowing down. We run the back straight, turn the last corner, then try to hold it together for the last 100 metres.

“2:58,” says John as I finish. We slowed down on that second lap by a few seconds, even though it was harder than the first lap. Everybody walks around, breathless for at least a minute. We take sips of water, chat with friends, and then saunter slowly back to the start line for the next repeat.

The second one always feels a little easier than the first. Without any increase in effort we run a couple of seconds faster for the opening lap, because we’re fully warmed up. But the second 400-metre lap is the same story: fatigue, a bit of desperation not to let the pace slip, and a silent competition within our immediate vicinity of teammates as a way of bolstering our resolve. In the middle of it, the stadium sound system blasts to life, with music for the football practice, a hard-driving rock song. It helps us a little, taking us out of our heads for a moment.

A gap opens between me and three others just ahead: Deb, Kate and Dean. I consciously increase my pace to close the 5 metre distance, and we head for the finish line in a tight pack. “2:57,” says John. We’ve completed two repeats, with four more to go. Best not to think about that, because we’re momentarily exhausted. I watch the runners come in behind me, then engage in conversation to take my mind off our task.

Running on a track is unlike any sort of team sport. There’s no obvious athletic fun other than the triumph of running fast. So why do it week after week, for marginal improvements in speed (maybe 30 seconds in a 5K race) over a season of training?

I think we all dream of being a faster – setting a new PB or knocking 10 minutes off a marathon time. That doesn’t come automatically with speed training, but without it, there’s no hope. Grit and determination in a race will only carry you so far. Your engine has to be tuned to rev at a higher RPM, and you only get that with several years of speed training.

That, in turn, is much easier to do in a group than individually. It’s a lot like in a race – you can push yourself harder in the company of others. The gold and silver medalists for 10,000 metres at the 2012 London Olympics (Mo Farrah of Great Britain and Galen Rupp of the U.S.)? They’re teammates who train together daily; that’s why they were embracing like best friends at the finish.

In my case, I’ve been running at the track with our Guelph Victors club for 7 years now. I’ve had faster seasons, much faster in fact, but I’ve struggled this year. Despite all the work, I feel no faster than I was in May, and perhaps a little slower. At 56 I start to wonder: will my old speed (say 2:45 for 800 metres, many times over) ever return? Am I training this hard, just to stay in place?

Early in the third repeat, Dean jumps out to a lead, and keeps it up for the whole 800 metres. He’s feeling a little stronger than the rest of our sub-group. I see no sign of the running funk he has complained to me about recently. He’s smooth, steady and tireless looking, at least from behind. He finishes in 2:50. Dean is 10 years younger than me; I recruited him to the club a few years ago, and now it looks like he will surpass me permanently in speed. I don’t sweat it; I’m happy for his progress.

At the end of the third repeat I introduce myself to a new, younger woman named Willy, in her mid-20s I would guess. I’ve never seen her at the track before, but she’s in the thick of our little sub-group, challenging us consistently on the second lap of each repeat. I praise her tenacity and welcome her to the club. She seems thrilled to have discovered us.

I certainly can’t keep up with the younger males who join our group periodically – they’re way up there, a good 10 or 20 seconds ahead on these workouts. But age nullifies gender by 10 or 20 years, so I’m consistently running at the same speed as the 30-something women now, the fastest females in our club. It’s a strange sort of equality, but I’ll take it, because they are dedicated, inspiring teammates.

On the sixth and last 800 metre repeat everyone runs a little faster. It’s always possible to give a little more when you know the suffering is almost over. I try to keep pace with Luke, a high school teacher who is my age. He’s a Victors original, with a lifetime of running experience and decades with our club. He’s seen faster days, but that doesn’t stop him from training hard now. He’s currently under the tutelage of a local Olympic-level athlete, Taylor Milne of the Speed River Track Club, in an effort to roll the clock back a few years.

Unfortunately, I’m only dropping my pace by a few seconds on this last 800, and my teammates are doing better than that, so I’m at the tail end of a line. “2:55” says John as I finish.

The denoument of the workout is a single kilometre of very fast running, sometimes at a full sprint, broken into 4 short pieces. First we run 400 metres, one lap, at a faster pace than we’ve been doing for the last half hour. We rest for 90 seconds, then run 300 metres (3/4 of a lap), even faster, in about a minute. Our rest decreases to 60 seconds, then we sprint 200 metres in 36 seconds. After a 30 second rest (hardly enough to catch our breath) we do a final 100 metres, as fast as we can go.

It might sound sadistic to do this at the end of a workout, but it’s thrilling to be running at top speed, albeit on tired legs. My sprint speed hasn’t declined as much as my endurance, so I’m closer to the lead on these repeats. Each little interval is faster than the one before, and the end of this week’s session comes very quickly.

We finish on the back straight of the track and slowly walk the 200 metres back to our water bottles and discarded clothing. Everyone is relaxed and laughing. The air is cool, but humid, and we’re all soaked in sweat, ready for a meal and a shower. The start line is crowded as we depart, with the second session about to start their workout – perhaps 40 runners tonight, led by coach David Brooks.

Deb, Kate, Luke and I jog away from the stadium, on a leisurely cool down run back to our homes. We’re fatigued, but jogging at this pace seems so easy. We share a joint glow of accomplishment, even if we’ll be back to do it all over again next week.

Here’s a great short video about our track workouts: We The River Episode 4 (scroll down the page to start video)