Zen and the art of bike tripping 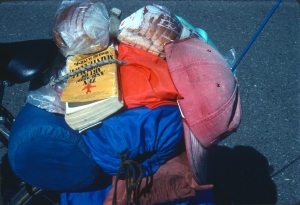 When my buddy and I biked across the country in 1976, the only book we carried with us was “Zen and the Art of Motorcycle Maintenance” by Robert Pirsig. I’m not sure why.The dense monster of a novel was about philosophy, reason and mental illness – although it was also a sort of travelogue. Maybe that’s what possessed us to bring it along for our own adventure.

Our copy got wet one night during a thunderstorm on the prairies, and we carried it for weeks on top of our gear to dry it out again. I read Zen, but didn’t really understand much of it. Everyone seemed to be reading it in the 1970s, making its author an unlikely star. It eventually sold five million copies over 40-plus years.

Does that make sense? I’m not sure, but it sounds great. His book was like that, and it also had a super-catchy title. I think Zen was like Stephen Hawkins’ “A Brief History of Time” a couple of decades later. Everyone liked to have it on their bookshelf, even if few were able to follow its complicated logic.

Robert Pirsig died on Monday, at 88. His obituary said, “he captured the post-1960s zeitgeist.” It also said he was as puzzled as anyone by the success of his unusual book. He was modest, and said his work wasn’t necessarily great, but it that it was a kulturbarer – a Swedish word meaning “culture-bearer.” That’s to say, it didn’t  change the culture – it simply heralded a change already underway.

In any case, Pirsig  captured us enough that we dragged his heavy, wet book across the country by bicycle, alternately reading it and scratching our heads along the way.